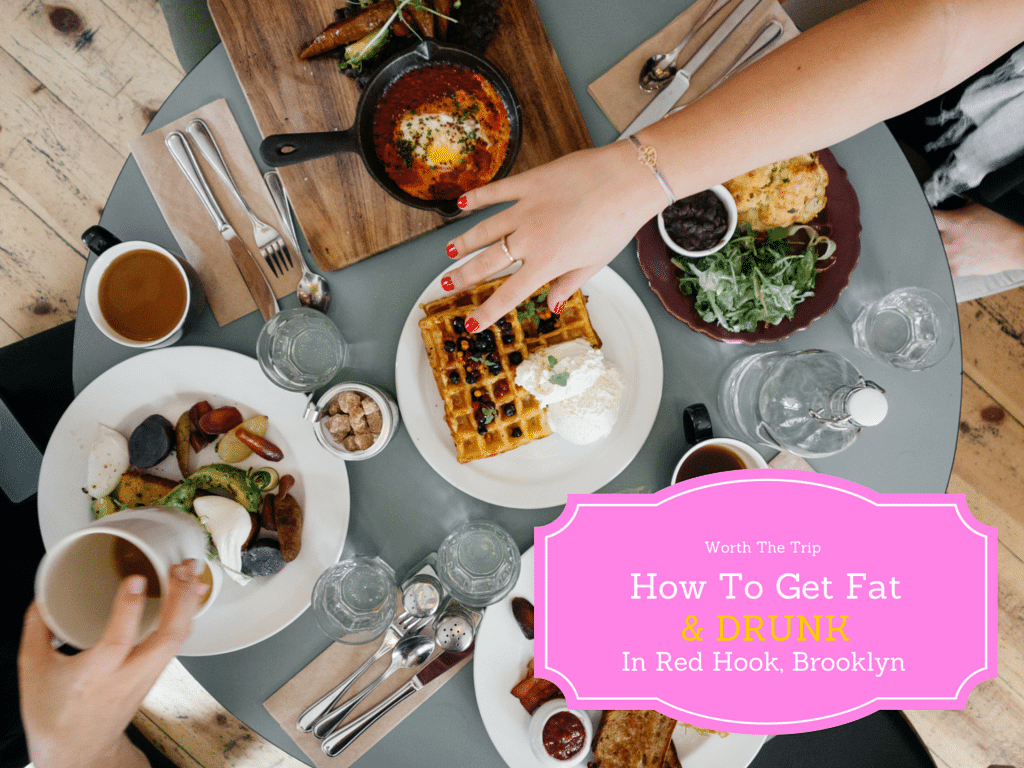 Whenever mentioning Red Hook — a Brooklyn neighborhood I’d never visited until now — I was always told it was “industrial and cool” but “way too difficult to get to.” After making the trip from Bushwick myself, I now realize my friends are really, really lazy. Okay, taking a bus or walking a mile from the subway isn’t ideal but…really? The way people talk they make it sound like a journey to the Arctic. My trip was simple: take the G-Train toward Church Street, exit at the Smith-9th Station and walk approximately one mile through the Carroll Gardens neighborhood to reach Red Hook, an up-and-coming neighborhood with so much to offer, especially in terms of views, art and, the best part, food and drink.

Here’s how I spent an awesome day getting drunk and fat in Red Hook, an itinerary I hope you’ll copy during your trip to NYC.

Tip: Need a NYC tour guide? Check out my custom tours and photo safaris for your next trip and see New York through the eyes of a local.

Let’s start with a little history lesson of Red Hook, named for its shape (“hoek” means “point” in Dutch) and red clay soil, as the neighborhood has plenty of it. There was a time when the cobbled streets we see today were mainly swampland known as Cypress Tree Island. As the area was relatively high in elevation — 40 to 50 feet — George Washington ordered Fort Defiance to be built here, outfitted with four cannons in an effort to dismay British troops during the American Revolution. This is why you’ll find many Red Hook streets named after Revolutionary War generals, as well as information displays around the neighborhood.

Now, on to the eats!

Confession: I’ve never been to Whole Foods (the horror!). I go to Mr. Kiwi, the Bushwick version of an organic grocery with about 1% of the selection — and 1% of the price — of Whole Foods. So I don’t know if I’m just clueless, but Red Hook’s Fairway Market is pretty damn awesome. They’ve got a chopped salad station, a hot and cold buffet, tons of local purveyor products, a wood fire-oven pizza station, their own in-house coffee roaster and a dizzying array of bean choices from around the world, plus normal supermarket fare. Best of all, in the back there’s an indoor/outdoor patio on the water with shaded picnic tables where you can eat your gourmet supermarket meal while watching the New York Water Taxi sail away to the neighboring IKEA. There are even gardens lining the patio and tons of small birds. It’s urban au naturale at it’s finest.

Despite adorable nearby restaurants like The Good Fork (they serve bibimbop, my favorite!), Brooklyn Crab and Hometown BBQ I decided to start with a Fairway meal on the water. Hey, some of us have a $7,000-out-of-pocket surgery to pay for next week. Thanks, Obamacare! (Not).

I actually ended up spending a bit more than I was hoping for a grocery store meal, but that’s because I opted for the dangerous $7.99/pound buffet. My total for the below came to $9.50, although I didn’t have to tip which was nice. There are cheaper Fairway options though if you’re not craving chicken Marsala and tomato mozzarella. The view from my Fairway table

A Parking Lot With A View

Red Hook isn’t just known for its supermarkets, but also it’s parking lots. No joke. Next to Fairway the parking lot is attached to a tiny park with a stellar view of the Statue of Liberty on the horizon. It’s definitely a great photo opp!

A panorama of my parking lot view

Moreover, the park links up with a path that takes you straight to one of the boozy stops on this tour:

While I’d never been, I knew of Red Hook Winery as id done a story on one of the former staff members, who recently opened the world’s first commercially viable rooftop vineyard. I was excited to try the wines coming from the establishment molding such forward-thinking minds.

So Red Hook Winery is super not easy to find. You that path coming from the parking lot park I mentioned above? I didn’t know about it until after the fact. Even if you take the street paths it’s not far at all; however, the route isn’t obvious.

After getting lost numerous times I called, and realized that while Yelp tells you it’s on Van Dyke it’s actually on a pier off Van Dyke, which you can access by making a right off Van Dyke onto Barnell and following the tasting room signs. I’m glad I finally found it, as my experience was awesome. I opted for a three 1-ounce tastings for $8, letting my server surprise me with the selections. While I probably wouldn’t purchase what he chose, each was very interesting, made with only New York grapes, produced and bottled at the winery, and unlike any wines I’d ever tasted. This is because the three wine-makers all have completely different styles, allowing for fun collaboration for tasting room creations.

The first was a “Nereides of the East,” a uber complex blend of Chenin Blanc and Chardonnay, spontaneously fermented with wild yeast in neutral oak. Next I had a Macari “Die Welt des Mondes,” a skin-fermented orange wine with toffee on the nose but dry as a bone. Not my typical style, but I was feeling adventurous. I’d definitely recommend for the venturesome palate. I finish with what becomes my favorite of the day, a full-bodied Cabernet-Merlot blend called Twenty One: Twenty Four, named after the military time of the moment Superstorm Sandy wiped out Red Hook Winery and the rest of Pier 41, 9:24pm. Twenty One: Twenty Four as well as League of the Storm were two wines bottled after Sandy using the small amount of wine that wasn’t destroyed and very limited resources. Can you imagine making wine without electricity using buckets and headlamps?!

What’s really fun is their wine-choosing process, beginning with an informal interview of sorts to understand your palate and then tailoring to that, but also challenging you. I also met some cool acquaintances at the bar, reminding me why I love Brooklyn so much — many people here are actually friendly!

A Swingle With Lady Liberty

Afterward it was time to satiate my sweet tooth at Steve’s Authentic Key Lime Pies, located in a street art-covered warehouse on the water. Although there are colorful picnic tables out front, I fill my water bottle — they fill them for free — order my Swingle and head to the adjacent Louis Valentino Junior Park, where I gaze out over Lady Liberty among kayakers and fishermen.

Wait, what the heck is a Swingle? A Swingle and a Statue. What a pairing! Steve even grows his own Key Limes

I’m glad you asked! The short version: heaven on a stick for just $6.50. The long version: a key lime pie made with homegrown key limes — you can see them growing out front — hand-dipped in chocolate and frozen. It’s even bit as tangy and sweet as it sounds.

If I could describe my perfect day, it would be sucking on a Swingle and gazing out at Lady Liberty across the East River. Sigh.

I couldn’t relax too long, though, as I had more chocolate and booze to inhale at Cacao Prieto, 100% worth the sugar coma I was inducing into my body.

But there is a healthy twist, here, at least I like to tell myself that. Here, single origin Dominican cacao and antioxidant-rich spirits are served side-by-side and sometimes intermixed. As the name states, cacao — the main ingredient of chocolate — is a major focus of Cacao Prieto. Their chocolate is 72% Dark, which is surprisingly not bitter due to their Vortex Winnower, a machine developed by Aerospace Engineer owner Daniel Prieto Preston to better separate sweet nibs from bitter shells. Additionally, because the beans aren’t fumigated the chocolate is one of the only 100% Pesticide-free chocolate bars on the market. While you may have heard dark chocolate has certain health benefits — like being good for your heart, improving cognitive function and being full of free radical-fight antioxidants — these advantages are also present in Cacao Prieto’s liquors. This is because their distilling process is unique in that it incorporates the antioxidants from their raw organic cacao. Sample their Don Rafael Cacao Rum made with delicious flavors of pure chocolate and coffee, or their Don Estaban Cacao Liqueur featuring tastes of dark chocolate, toffee, vanilla bean, toasted marshmallow and pepper.

And of course, a tour of the facilities can really bring all the information — and deliciousness — to life.

Have you visited Red Hook, Brooklyn? What would you add to the above itinerary? Please share in the comments below.