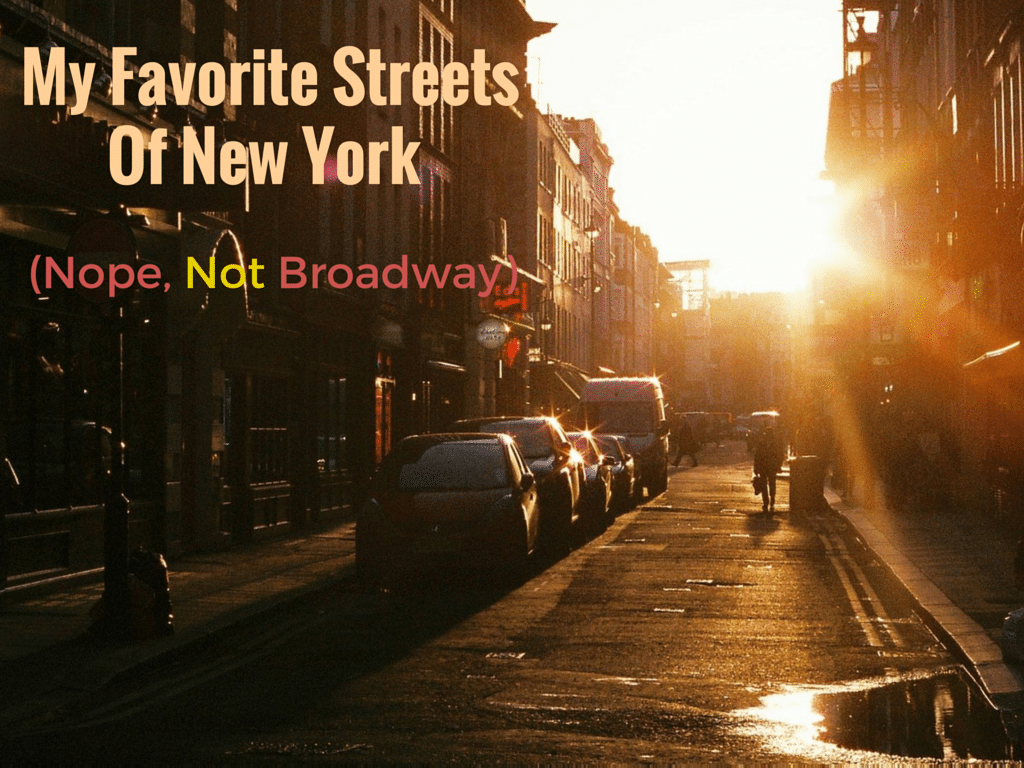 Look, I don’t hate Broadway or anything. Sure, the bit in Times Square is packed with so many tourists you feel like if you fell you’d be stomped to death, and having topless women with American flags painted on their boobs follow me around screaming “Photo?!” is kind of annoying; but as the street runs for 33 miles (53 kilometers) through Manhattan, the Bronx and beyond there are enjoyable sections and attractions.

That being said, there are certain streets of New York that I love exploring on a regular basis, both for their ambiance and offerings. These are those streets. Feel free to add your own suggestions in the comments below. Exploring Bushwick street art. Here I am at The Wick, a really awesome bar and event space in the old Brewery District of Bushwick near the Montrose stop.

I can’t believe it’s been over two years since I moved to Bushwick, Brooklyn. One of the main draws for me to the neighborhood, both then and now, is the experimental arts scene and appreciation of creativity that is so vibrant. A top way to experience this is via the outdoor street art gallery down Troutman near Maria Hernandez Park — in between Wycoff and St. Nicholas — hosted by the Bushwick Collective. Walking the colorful blocks you become completely immersed in thought-provoking works, pop culture references and movement-pushing pictures.

Wandering the Bushwick streets around the Montrose and Morgan L stops is another way to envelop yourself in street art, a great way to get inspired. Many of my tour guests are astounded to realize that Manhattan didn’t always extend to five boroughs, or even the entire island of Manhattan, but was once condensed into what we know today as Lower Manhattan. Wall Street was actually a wall used to defend the city, Broad Street was a canal and City Hall was the edge of the city. Pretty crazy to believe, right?

Along with that, Stone Street in Lower Manhattan was the first paved street in the city, and a historic landmark because of this. It was also once known as Brewer’s Row due to the abundance of breweries residing there. This boozy history has continued into today, as wandering the cobblestone alley you can create a DIY bar crawl via venues in historic buildings like The Growler Bites & Brews (great bar food and cool basement cocktail bar called Underdog), Vintry Wine & Whiskey (ambient wine bar) and Ulysses Folk House (lively and social Irish pub), to name a few.

I will admit Faicco’s arancini (rice balls coated in bread crumbs) have a lot to do with this — although that’s certainly not all. If you’re a foodie, Bleeker Street — one of only two streets to run from the West to East Village — is a must-explore. Forget Little Italy, which has honestly been so absorbed by Chinatown barely exists anymore. On Bleeker Street and its surroundings you’ll find loads of authentic Italian culture. For example, the above-mentioned Faicco’s was opened in 1896 by Edward Faicco, who moved here from Sorrento, while Bleeker Street Pizza serves Tuscan-style thin-crust using a recipe from the owner’s grandmother’s homeland recipe.

Other delicious stops on Bleeker Street: Blind Tiger Ale House (beer nerds welcome), Murray’s Cheese Bar (a stinky heaven of specialty and rare cheeses from around the world) and Old Tbilisi Garden (delicious Georgian — as in former Soviet republic, not the state — cuisine). Follow Bleeker to reach Father Demo Square, surrounded by sweet tooth sanctuaries like Molly’s Cupcakes (make your own cupcakes, sit on swings and play board games) and Popbar (sustainable gelato-on-a-stick hand-dipped in various sauces and toppings), as well as the beautiful Our Lady of Pompeii Church, which looks like it belongs in Italy, which makes sense as it was created for Italian immigrants in the 1850s. Look how much fun this trifecta of amazing streets is? This is my friends and I — including the awesome Nomadic Matt and Legendary Adventures of Anna — after a show at Rockwood Music Hall during the annual CMJ Music Marathon.

4. Ludlow Street (With Some Delancey & Allen Mixed In)

Outside of Brooklyn, my favorite neighborhood to hang out in is the Lower East Side in Manhattan. Along with indie theaters, the Williamsburg Bridge, counter culture cafes, myriad nightlife choices, comedy clubs, delicious eateries (Pop Karma‘s truffle popcorn is my favorite!) and historic restaurants (like Katz’s Deli since 1888 and Kossar’s Bialy’s since the 1930s), there aretons of free and budget-friendly live music shows.

Stroll down Ludlow and you’ll encounter venues like Cake Shop, Leftfield and Pianos, my top pick of the three. Stray a bit from the path onto Delancey to check out a show at Bowery Ballroom or Moscow 57, or Allen where you can go to …excitement building…the super awesome Rockwood Music Hall (!).

Photo courtesy of The High Line

Chelsea is known for its hundreds of art galleries, making for an easy day of creative venue hopping. While 10th Avenue itself isn’t where you’ll find the main gallery clusters, the streets right off of it like 24th-26th are chock full (click here for a Chelsea Gallery Map). What’s also awesome about 10th Avenue is The High Line, an elevated park full of public art, eateries, views and events created from an abandoned railway, runs along and above it between 12th and 30th Streets. The ambiance is definitely a change from hectic Midtown.

What streets of New York are your favorite? Please share in the comments below.