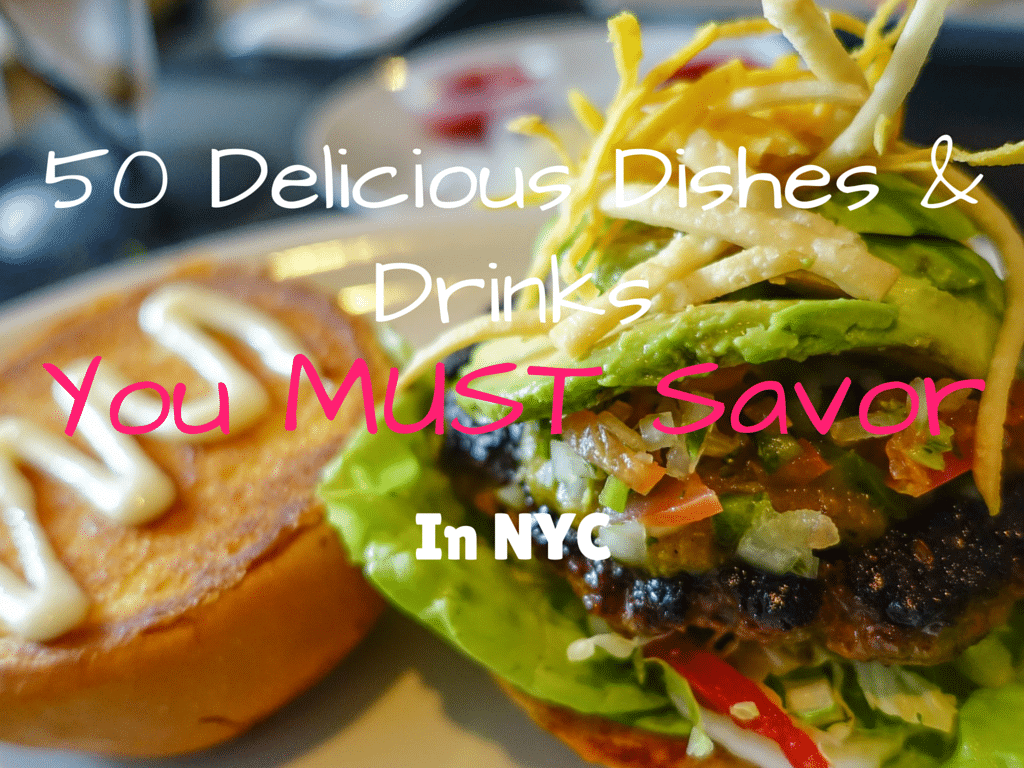 I was once on a trip with four other New Yorkers and one guy from Colorado who, after spending enough time with us surmised that if he moved to NYC he would be a fat drunk because “all you guys talk about is your favorite places to eat and drink.” It’s true. There are just so many restaurants fusing inventive concepts and delicious food and drink not to spend 75% of your income frequenting them.

This also means finding the best of the best palate pleasers can be tricky.

To help you find the most memorable NYC food I’ve rounded up a list of my most life-changing meals. Most of these I’ve had a least one dream about. Have anything you’d like to add to the list? Please share in the comments below.

Looking for a NYC tour guide? Check out my custom tours & photo safaris!

1. A sweet and tangy Hibiscus donut from Dough Brooklyn in Bedstuy. 3. Dipalo Burrata — burrata sourced from the local Italian specialty store, DiPalo’s, and served with toasted cibatta bread, olive oil and sea salt — at the farm-to-table focused Black Tree in the Lower East Side, best paired with one of their creative pickle backs like “Pear & Barr Hill Gin” and “Watermelon & Due North Rum.”

4. The Murray’s Melt at Murray’s Cheese Bar in the West Village is the stuff dreams are made of — at least if you’re not lactose intolerant — with a secret cheese blend and bacon on a pullman loaf, served with a hot smokey tomato soup.

5. No, the Crack Pie from Milk Bar (they have outposts all over the city) doesn’t actually contain crack, although it is extremely addictive, a sort of gooey butter cake and chess pie combo in a toasted oat crust. 6. Specialty pizzas made from a double wood burning Vesuvio clay oven at Tavola in Hell’s Kitchen, one of my favorite spots all around for regional Italian food. The kale salad with a juicy burger at Sugarburg

8. A 100% grass-fed beef burger at Sugarburg paired with one of their awesome craft beers or whiskeys in Williamsburg.

9. El Maguey Y La Tuna in the Lower East Side is an absolutely adorable family-run eatery with a divey atmosphere that serves authentic, homemade Mexican food for cheap. I love their stuffed jalapenos, house-made chorizo burrito and margaritas (made without sour mix!).

10. Calle Ocho in the Upper West Side begins their amazing Nuevo Latino experience with yucca-made bread rolls. Get the shellfish and chorizo salmon and the house-made Sangria, the best I’ve ever had in NYC (and I don’t like Sangria to begin with because it usually tastes like bad juice!). 11. Horchata cocktails and the homemade guacamole sampler at Horchata NYC in the West Village.

12. Sushisamba in the West Village serves tasty super fresh sushi, along with dishes fusing Latin and Japanese cuisine. I love the Yellowtail sashimi with jalapeno and lemongrass for an herbal kick. Cacao goodness at The Chocolate Room

13. One of my favorite sweet spots in Brooklyn is The Chocolate Room in Carroll Gardens, where you can order a half organic Fair Trade coffee and a half house-made dark hot chocolate, called “The Lou.”

15. The NoMad Hotel in Flatiron, with its multiple rooms — like a naturally-lit Atrium and a quiet library fully culinary and cocktail books — is a memorable splurge. The $16 cocktails are so, so, so worth it (I like having something bespoke made for my spicy tastebuds), and the truffle-stuffed chicken is exactly as delicious as it sounds.

16. Pies ‘n’ Thighs chicken, waffles and buttermilk biscuits in Williamsburg and the Lower East Side is farm-to-table southern deliciousness, as are the butter pecan crunch donuts with poached blueberry filling. 19. Oxtail sloppy joes from The Rookery Bar in Bushwick — especially eaten on their outdoor patio. Look at those chilaquiles!

23. A Sicilian slice followed by the homemade spumoni at L&B Spumoni Gardens in Gravesend is worth the trip, although if you don’t want to leave Manhattan Artichoke Basille’s Pizza‘s artichoke dip-topped wedge is another worthwhile food itinerary addition. A fun night at Barcade in Williamsburg

24. Craft beers and video games at Barcade in Williamsburg.

25. Brunch at Cafe Cortadito in the East Village means sweet plantain omelet with Spanish chorizo and ham and strong pitchers of Champagne mojitos. 26. Pickled pineapple from The Pickle Guys, where as soon as you walk in you’ll become immersed in colorful pickle barrels, with numerous varieties of typical pickles as well as more unusual pickled items and fruits.

27. Artisanal charcuterie — seriously, the best in the city — and rare and delicious craft beers sourced from around the world at Spuyten Duyvil in Williamsburg. They also have tasty specialty sodas and a patio!

28. I love the 24-hour marinated pork short ribs served in a clay pot from A Casa Fox, especially delicious in winter near their fireplace. 29. Brooklyn Oenology in Williamsburg is uber focused on New York food, drink and art, and is a great place to do some inexpensive wine tasting while nibbling the day’s charcuterie selection. 30. Lamb kebabs from Savoury NYC, who specialize in fusing Northern & Southern Indian cuisines in a modern style with everything made fresh in house.

31. The chocolate and bacon treats from The Baconery — whose motto is ““Life is just better with bacon” — are life-changing, at least if you love contrasting flavors that just work. Some items to try: bacon brownies, bacon pecan pie, chocolate-covered bacon, bacon hot chocolate and maple bacon blondies. 32. Boozy cupcakes that actually taste like cocktails and are filled with alcohol — you must be 21 to enter — at Prohibition Bakery on the Lower East Side. The Pretzels & Beer Cupcake is outstanding.

33. Hot pot at 99 Favor Taste in the Lower East Side makes for a fun and cheap night out with friends, as you cook your own meats, veggies and noodles in the boiling pot in front of you. 34. Popcorn is one of my all-time favorite foods, with my favorite artisanal popcorn joint being Pop Karma, who serve flavors like Spanish Barbecue, Masala, Zen Cheddar and Pure Caramel. My favorite, however, is the White Truffle Cheddar, supremely addictive and satisfying.

35. A chicken parm sandwich with a side of Buffalo cucumbers from Parm. Chowing down on a delicious ice cream sandwich at Smorgasburg

37. The Good Batch in Clinton Hill makes sustainable ice cream sandwiches the size of a dinner plate, featuring giant homemade cookies with ice cream stuffed in between. Get it with a latte art-adorned coffee! Sweet Revenge is a fun venue for unique and tasty pairings 39. The bahn mi’s at Bánh Mì Saigon in Nolita are delicious, especially the spicy BBQ pork with jalapenos and pickled carrots.

40. Molly’s Cupcakes in the West Village is a must, whether you’re traveling with kids or a kid at heart. Create your own cupcake or order the Salted Caramel Butterscotch — vanilla cake stuffed with butterscotch caramel pudding and topped with salted vanilla buttercream and caramel drizzle — to savor at their whimsical swing-adorned bar. Board games lining the shelves are a fun addition. A fresh lobster from the North River Lobster Co

42. One of my favorite NYC discoveries has been a 3-deck lobster boat restaurant called the North River Lobster Co offering a free sail, beautiful skyline views, uber fresh lobster and Mason jar cocktails — for free! Well, you pay for the food, but the sail itself is complimentary and you can stay on as long as you like. 43. OddFellows Ice Cream in Williamsburg and the East Village sells totally made-from-scratch ice cream, even making their own base — an extremely rare thing to find in the US — and crafts atypical flavors using chef-driven methods. Some favorites: Black Pepper Strawberry, Saffron Passionfruit, Oatmeal Cookie Dough, S’mores and Buttermilk Honey Blueberry, although keep in mind flavors rotate.

44. In Sunset Park you’ll find my favorite spot for Ecuadorian food — El Tesoro Ecuatoriano. Order the Sopa Marinera seafood soup with huge chunks of crab and lobster, and the Hornado de Chancho made with tender pork wrapped in a crispy skin. Tutu’s Nutella French Toast is nothing short of amazing

46. Faicco’s Italian Specialties‘ arancini — rice balls coated in bread crumbs — are the best in the city, with the West Village shop opened in 1896 by Edward Faicco who immigrated to NYC from Sorrento, Italy. 47. Katz’s Delicatessen — open since 1888 in the Lower East Side — serves a melt-in-your-mouth pastrami sandwich that’s the size of your head. 48. Turkish simit (healthier and better on your waistline than a bagel) served with Turkish figs and a ricotta topped with pepper and honey at Simit + Smith.

49. A juicy burger with a side of chicken liver toast from The Spotted Pig in the West Village is a must-have meal on your NYC trip.

50. Sophie’s Cuban Cuisine features large delicious portions for a cheap price, with anything you order — get the Cuban sandwich or the baked chicken with sweet plantains — enhanced by their signature spicy green sauce.

Note: As restaurant and bar menus are constantly changing, make sure to call ahead to ensure an item is still available before visiting one of the below venues. Got a food or drink to add to the list? Would love to hear it in the comments below.